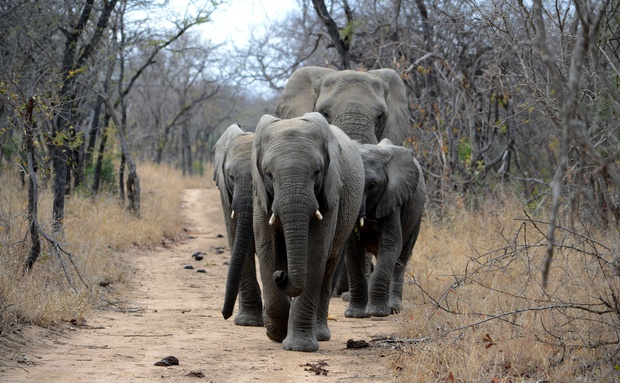 Space allowance and resource dispersion is recognised as an important factor affecting the welfare of elephants in captivity. In the present pilot study, we investigated distances kept among individuals in an artificially created semi-captive mixed-sex group of African elephants, when individuals were free to disperse. The study involved a herd of six elephants, three females (aged 11 to 16 years), and three males (aged 15 to 23 years). They were observed through instantaneous scan sampling in order to assess distances between individuals and body or- ientation in space and through continuous focal animal sampling to assess inter-specific social behaviour and general activity. A total of 312 suitable scans were collected for evaluation of distances between individuals. While foraging in absence of discernible space constraints, elephants maintained a distance equalling five or more body lengths in 63.9% of the scans, with wide differences between dyads. Little social behaviour, mainly affiliative, was recorded.

The results of this pilot study suggest further scientific investigation could help to understand whether placing resources at five body lengths distance or over in a controlled environment could increase their simultaneous utilisation by all members of a group and contribute to decrease aggression. However, caution is warranted when applying results to different groups, environments and management regimes.